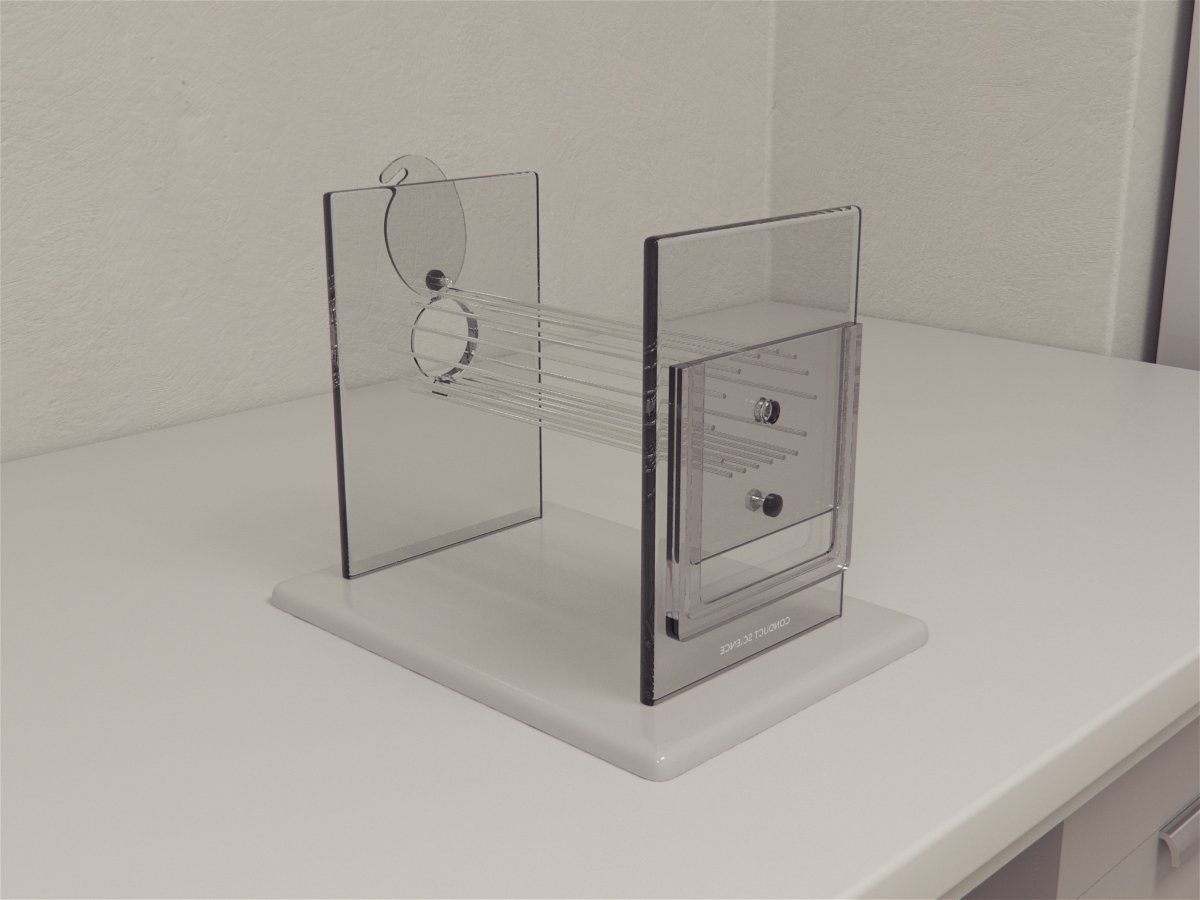 The Bowman Style Rodent Restrainer holds rodents up to 750g.  Rodents can be placed by removing the upper rods and replacing them after insertion. Alternatively, they can be placed through an access porthole in the rear. The front “guillotine” door can be adjusted and locked into three possible positions. This door has stainless steel “spring loaded” lock. Suction cup feet on the white plastic base secure the device during use.

Mechanical restrainers are often utilized in experiments that require the immobilization of animals to carry out precision-based procedures and prevent behaviors that can potentially influence the experimental results. Restraining ensures the safety of the animals and staff while performing processes such as surgery, sample collection, drug administration, and other manipulations. Restrainers are also used in experiments that evaluate stress in animals and in developing stress-related treatments and drugs.

The Bowman-type restrainer for rodents uses a simple cylindrical cage design to restrain the animal. The apparatus body is made of clear acrylic, and the cage is made using stainless steel rods. The apparatus allows two modes of placement; the animal can be placed in the restrainer either by the removal of the upper poles and placing the poles back in position or by the entry port gap in the back. The front of the cage has a guillotine entryway equipped with stainless-steel spring stacked bolt. This entryway can be balanced and bolted into three conceivable positions. Suction feet on the base of the apparatus ensures that the device remains secure while in use.

The overall length of the apparatus is 22.8cm, and it has a height of 27.9cm. The rear access port has a diameter of 5.08 cm and allows easy entry for the animal. Eighteen customizable stainless-steel poles that are adjustable to 8.9 cm are used to for the holding cage. The apparatus is capable of restraining animals in the weight range 250 to 750 grams.

The variable bypass vaporizers are the most commonly used vaporizes. Their working principle involves splitting the fresh gas flow and saturating a small portion completely with the volatile anesthetic before recombining into the main gas flow. This process is achieved by setting of the anesthetic concentration using the control dial and the pressurized chamber of the plenum vaporizers. These devices are also equipped with thermo-compensation capabilities for a steady vaporizer output.

Before beginning the process of restraining the animal, ensure that the apparatus is cleaned thoroughly. Place the restraining apparatus on a flat surface. Avoid any sudden and unwarranted behaviors that could startle and stress the animal. A stressed or frightened animal could make handling and restraining procedures difficult. Using an appropriate technique and a firm but gentle grip, pick up the animal from its housing. Generally, the animal can be picked up by placing the thumb and forefinger of one hand around the neck, while supporting its hindquarters with the other hand. Ensure the technique does not cause any injury to the animal.

Prolonged restraining in a mechanical restrainer can be stressful for the animal. It is advisable that the animals are not restrained for more than 30 minutes to prevent unnecessary stress and anxiety. If the animals must be restrained for long periods of time, other less stressful approaches should be considered.

Batzri et al. evaluated the effect of low ionizing radiation on gastric secretory functions in chronic guinea pigs. For the experiment, guinea pigs were surgically implanted with a permanent gastric cannula. Animals were fasted and observed by being restrained in a Bowman restrainer. Each animal underwent unilateral exposure to 400 cGy of total body Cobalt radiation (100 cGy/min). Evaluation of gastric secretions was performed on the day of the radiation and one week later. It was observed that during histamine stimulation, the irradiations inhibited the rise in gastric juice volume. Further, a reduction in normal body weight gain was also observed. It was concluded that an immediate, long-lasting effect of ionizing radiations could be observed on the gastric mucosal functions in guinea pigs.

Rush et al. evaluated the absolute oral bioavailability of renin inhibitor peptide, ditekiren. Male Sprague Dawley rats that were implanted with bile duct, duodenum, and superior vena cava cannulae, were used for the investigations. After recovery from the implantation surgery (4 to 5 days), the animals were fasted overnight (with access to water) and placed in Bowman restrainers. Following this, the connector between the bile duct and duodenum cannula was replaced with a spliced extension tubing for bile collection. To compensate for the loss of bile salt and to prevent dehydration, immediate, continuous infusion of sodium taurocholate through the duodenum cannula was initiated. The subjects were then dosed with ditekiren either orally (p.o.) at 50 mg/kg or intravenously (i.v.) at 10 mg/kg. Results of serum ditekerin and biliary ditekerin quantified by activity and HPLC assay indicated that ditekiren was poorly absorbed and rapidly cleared once it had entered the circulation system.

Zeredo et al. speculated if a high-intensity infrared laser could produce antinociceptive effects similar to the mechanical and thermal stimulation of needles at acupuncture points. For their study, male Sprague-Dawley rats were divided into three groups; laser, needle and restraint group. All the subjects were restrained in a Bowman restrainer for 10 minutes during which they received either laser or needle acupuncture treatment on a point equivalent to the Taixi in traditional acupuncture charts. The restraint group only received random manipulation of their paws. A pulsed erbium YAG laser system (wavelength 2.94 μm, 65 mJ/pulse at 3 pulses per second) was used to irradiate the area to reach a temperature of 45 ±1°C from a 5 mm distance. The subjects were then tested in the tail-flick test to evaluate the anti-nociceptive effects, 60 minutes after restraint. The result suggested that both methods were effective in producing analgesic effects immediately after the treatment. Further, it was also observed that the laser stimulation’s effect was still observable 45 minutes after the treatment.

Animals should be allowed to acclimate to their new environment for at least three days if they are shipped in. Further, they should also be habituated to handling. This ensures that the animal does not suffer from undue stress and anxiety.

Animal’s psychological state and innate behavior must be considered before approaching them and restraining them. The animals must be approached appropriately, avoiding any issues such as loud noises and sudden movements, that can potentially stress or frighten them. Always hold the animals with a firm but gentle grip, taking precaution to prevent any handling injuries. For certain animals, it might be advisable to seek assistance from fellow staff to restrain them. Restrainer should be adjusted to accommodate the size of the animal to prevent respiration issues or escaping. In case the animal must be restrained for a prolonged period, chemical restraining may prove to be a better option than physical restraint.

The Bowman restrainer is designed using clear acrylic and stainless-steel pole cage which gives visual access to the status of the animal and provides easy access to the animal. The design also permits balancing and bolting of the guillotine front entryway into three conceivable positions, which helps prevent escaping. The suction feet ensure that the apparatus remains secure and stable during the procedures. The removable poles allow an easy, alternate route for placing the animal in addition to the rear entry. Limiting the mobility of the animal ensures that the procedures are performed with precision and without causing damage to the subject.