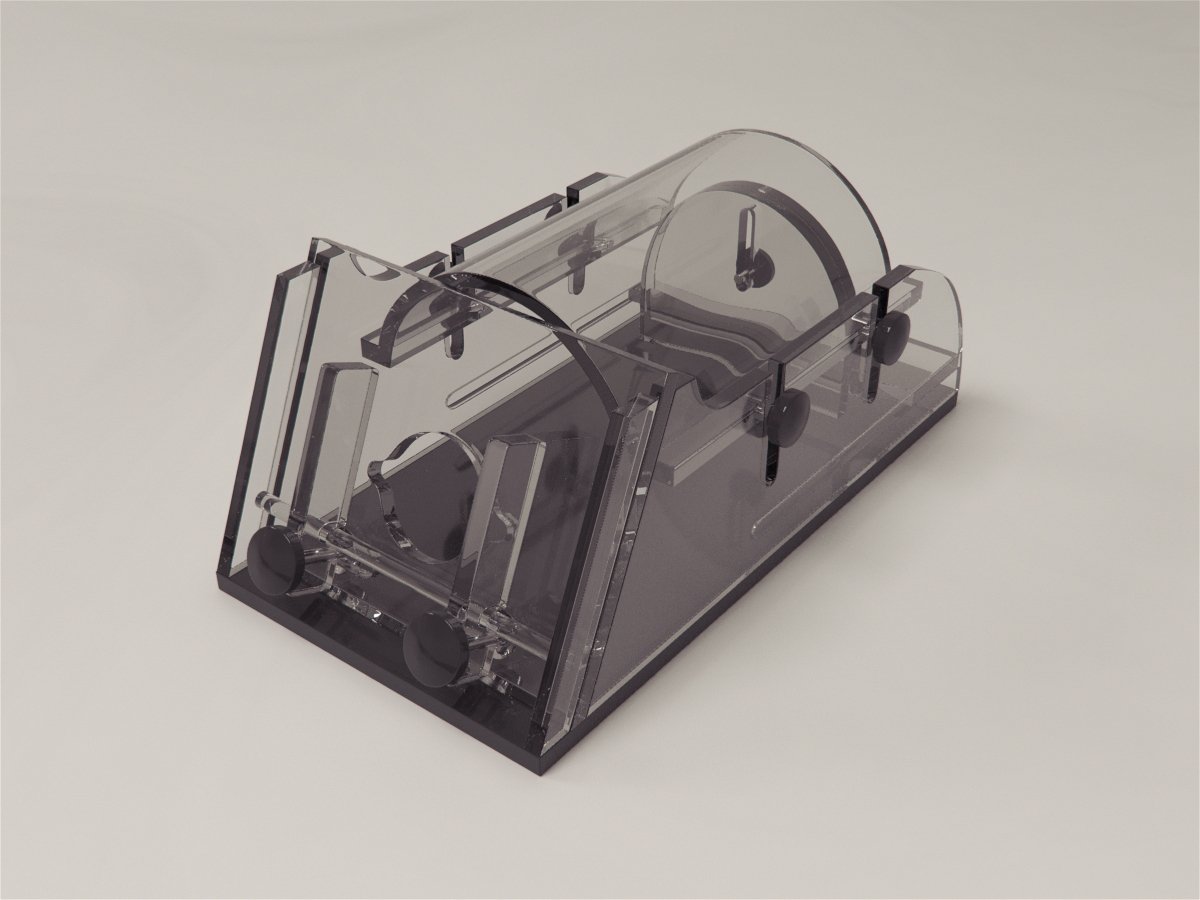 Guinea pigs are timid creatures that share many biological similarities with humans. When accustomed to handling from an early age, guinea pigs tend to be comfortable with being picked up. Despite their docile nature, they are known to have a considerable explorative drive in familiar and safe terrains. They have been used in experimental studies for centuries due to their biological similarities to humans. Past decades saw their use in studies of infectious diseases, such as tuberculosis by Robert Koch in 1882 (Cambau and Drancourt, 2014), and in the development of vaccines. Further, guinea pigs also played a pivotal role in the discovery of Vitamin C (Holst and Frölich, 1907) and continued to have an important role in collagen biosynthesis studies (Barnes, 1975). Although now mostly replaced by rats and mice, guinea pigs are still a primary organism model for juvenile diabetes, tuberculosis, scurvy, and pregnancy complications.

Guinea pig restrainers are often used to prevent movement or behaviors that can potentially influence the experimental results. Restraining of the animal makes the process of examination, collecting of samples, drug administration, therapy, or manipulation easy and safe for both the animal and the staff. Guinea pig restrainers are designed to be humane, size appropriate and safe for the animal. While choosing a restrainer, it is important that the right size is selected, since a small size can result in respiratory issues and larger sizes may allow movements and escape. Other restrainers similar in function to the Guinea Pig restrainer include the Flat Bottom restrainer, the Broome restrainer, and the Bowman restrainer.

Guinea pig restrainer is designed using a high-quality clear acrylic that allows the researcher to have visual access to the animal’s awareness and status. The restrainer is a semi-cylindrical apparatus fixed onto a durable flat base. It also comes with adjustable head restraint bars, an adjustable back plate, a locking adjustment pin for neck support and an adjustable formed back support. Further, a non-slip flooring is also provided in the restrainer.

The variable bypass vaporizers are the most commonly used vaporizes. Their working principle involves splitting the fresh gas flow and saturating a small portion completely with the volatile anesthetic before recombining into the main gas flow. This process is achieved by setting of the anesthetic concentration using the control dial and the pressurized chamber of the plenum vaporizers. These devices are also equipped with thermo-compensation capabilities for a steady vaporizer output.

Guinea pigs are docile animals that are easily frightened. When approaching them, it is important that they are not startled to prevent them from squirming to avoid restraint. Care must also be taken to avoid subjecting the animal to unnecessary stress since this can influence the investigation. Often, animals that are habituated to handling procedures from an early age are more compliant with the procedures.

Before beginning the process of restraining the animal ensure that the apparatus is cleaned thoroughly. Place the restraining apparatus on a flat surface. Approach the animal with confidence without making any loud noises or sudden movements to avoid frightening them. Use a firm but gentle grip to pick up the animal. Place the thumb and forefinger of one hand around the neck, while supporting its hindquarters with the other hand. It is important to constantly support the hind legs of the animal to prevent it from injuring its back. Place the animal’s head near the restrainer’s entry and gently place the animal in the restrainer. Adjust the head restraint bars, the back plate, neck support and back support to provide a snug fit for the animal without causing any distress to it.